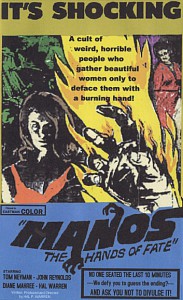 I have a weakness for movies that are so bad that they become unintentionally funny. The master of the genre is of course Edward D. Wood, Jr. who spend his entirely life making a long line of absolutely brilliantly poor movies.

One movie however stands out as so poor that it makes Ed Wood look extremely talented and that is Manos: The Hands of Fate.

Some highlights from the reviews around the web:

And here it is – the pure and undiluted horror that is Manos: